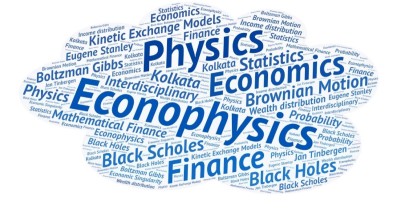 As physics became prominent in all natural sciences, economics claimed that stature in social sciences. Economics came to be regarded as mother of all social sciences. Physicists thought that after roaming through observable universe in space as well as predict its nature over a period of time from big bang to far future; they could also predict economic behaviour of humans and market outcomes. After all, they landed on moon and reached the surface of Mars. They predicted black holes and gravitational waves and then captured their existence through irrefutable evidence like images and sound. They discovered physical laws which are not just locally applicable on earth, but outside of earth as well.

“We are headed toward ‘perfect capitalism,’ when the laws of supply and demand become exact, because everyone knows everything about a product, service or customer. We will know precisely where the supply curve meets the demand curve, which will make the marketplace vastly more efficient.[i]”

Those scientists who believe in Scientism and hold that the experimental method is the only arbiter in all matters of life need to look no further than the field of economics where the tools and concepts of physics are applied. Even though science cannot be arbiter in morals, defining motives, public policy and politics, but it cannot even be a perfect and sufficient tool in explaining economic behaviour by taking the analogy of animal behaviour which is based on self-interest and survival instincts.

Mathematical tools like differential calculus, integral calculus, linear algebra, real analysis, spectral analysis, chaos theory, linear programming, classical statistics, Bayesian statistics, stochastic processes, Fourier analysis, fuzzy logic and neural networks are increasingly applied to predict human behaviour in markets. This application is based on the presumption that the tools used to predict the behaviour of atomic particles in a system and cell in an organism are also suitable in explaining conscious human choices.

Let us glance over the rate of success by not going too far in time. Not only majority of the economists could not predict the Great Financial Crisis of 2007-09 from their models, but had also failed to even entertain the idea as to how it can happen since their models assumed apriori that markets are efficient and always clear. Nobel Laureate economist Paul Krugman writes:

“Few economists saw our current crisis coming, but this predictive failure was the least of the field’s problems. More important was the profession’s blindness to the very possibility of catastrophic failures in a market economy. During the golden years, financial economists came to believe that markets were inherently stable — indeed, that stocks and other assets were always priced just right. There was nothing in the prevailing models suggesting the possibility of the kind of collapse that happened last year.[ii]”

Alan Greenspan, the long-time Central Bank Chairman of Federal Reserve Bank in USA was looked upon and regarded as Albert Einstein of economics having erudite knowledge and control over the pulse of the economy. He admitted that he was shocked and did not understand what has happened and how it can be dealt with in his initial public remarks.

Dynamic Stochastic General Equilibrium in use by the policymakers at the onset of Great Financial Crisis of 2007-09 brought dynamism over static models, general equilibrium over partial equilibrium and stochasticity or randomness over non-randomness and certainty. They were supposedly micro-founded and hence economists of all major schools had a broad consensus that they are reliable. The Great Financial Crisis of 2007-09 changed all that. Nobel Laureate, Robert Solow remarked:

“Economic theory is always and inevitably too simple; that cannot be helped. But it is all the more important to keep pointing out foolishness wherever it appears. Especially when it comes to matters as important as macroeconomics, a mainstream economist like me insists that every proposition must pass the smell test: does this really make sense? I do not think that the currently popular DSGE models pass the smell test. They take it for granted that the whole economy can be thought about as if it were a single, consistent person or dynasty carrying out a rationally designed, long-term plan, occasionally disturbed by unexpected shocks, but adapting to them in a rational, consistent way. I do not think that this picture passes the smell test. The protagonists of this idea make a claim to respectability by asserting that it is founded on what we know about microeconomic behaviour, but I think that this claim is generally phony. The advocates no doubt believe what they say, but they seem to have stopped sniffing or to have lost their sense of smell altogether.[iii]”

“A person is given one preference ordering, and as and when the need arises this is supposed to reflect his interests, represent his welfare, summarize his idea of what should be done, and describe his actual choices and behaviour. Can one preference ordering do all these things? A person thus described may be “rational” in the limited sense of revealing no inconsistencies in his choice behaviour, but if he has no use for these distinctions between quite different concepts, he must be a bit of a fool.[iv]”

Disregarding history, political economy, culture, institutions, heterogeneity, multiple motives and presence of non-economic impulses in human behaviour has resulted in lack of explanatory power in models. Most explanations that come from the models comprise commonplace knowledge that is well known in advance by people outside of the field of economics. Policymaking sets aside abstract models and then try ad hoc adjustments to appease public and manage political economy. Prof. Gregory Mankiw aspired to see economists working as dentists as envisioned by John Maynard Keynes. But, this aspiration is not achieved even after almost a century. In fact, mathematical abstraction to understand human behaviour like lifeless subatomic particles or celestial bodies that behave uniformly has led to failure in explaining human behaviour ex-post (after the event), let alone predicting it ex-ante (before the event).

A decade after the Great Economic Recession of 2007-09, the 2018 Nobel Laureate in Economics Paul Romer summarised his abstract of the paper “Trouble with Macroeconomics” as follows:

“For more than three decades, macroeconomics has gone backwards. The treatment of identification now is no more credible than in the early 1970s but escapes challenge because it is so much more opaque. Macroeconomic theorists dismiss mere facts by feigning an obtuse ignorance about such simple assertions as “tight monetary policy can cause a recession.” Their models attribute fluctuations in aggregate variables to imaginary causal forces that are not influenced by the action that any person takes. A parallel with string theory from physics hints at a general failure mode of science that is triggered when respect for highly regarded leaders evolves into a deference to authority that displaces objective fact from its position as the ultimate determinant of scientific truth.[v]”

Thus, it is now increasingly realized that understanding cultures, institutions, human psychology and doing differential diagnosis in every given problematic situation is important rather than relying on abstract model results which ignore important factors due to their lack of malleability with mathematical norms. Such models which skip important details just because these details constrain the use of mathematics are bound to give less reliable results. Most of the incomplete mathematical economics models and their estimation using mathematical and statistical tools using proxy data which does not have universal definition is an example of misapplication of scientific method and scientific tools in domains where they do not fit and suffice alone.