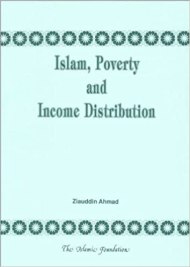 In this book, the author emphasizes that the approach to tackle poverty in Islamic economics framework employs multiple institutions. Islamic principles urge voluntary charitable behaviour. While Zakat is fractional distribution of some wealth and income, laws of inheritance in Islamic economics redistribute the whole of wealth including assets in personal use to a wide array of relations. This redistribution happens for each person in every family. This one-to-many non-market based, but wholesome distribution of wealth owned by every single person achieves the redistribution objective. Explaining the distinctive feature of Islamic laws of inheritance distribution, the noted author writes: “as compared to inheritance laws and customs prevalent in many other societies, it leads to wider intergenerational dispersal of accumulated wealth”.

On targeted distribution embedded in the institution of Zakat, the author writes: “Since the incidence of Zakah is on relatively well-off sections of the population and the proceeds have to be spent primarily for eradication of poverty so long as poverty exists, it serves a redistributive purpose”. The author notes that as an income maintenance scheme, it reduces the income differential between the rich and the poor. If Zakat is distributed in the form of productive assets, it provides asset ownership that enhances consumption not only in the short run, but also in the long run.

On the other hand, Islamic prohibition of interest avoids any privilege and factor return to money capital unless it is converted into real and productive asset or participates in the production process as entrepreneurial capital. This takes away the privilege capital has in the system of capitalism where the owner of money capital can simply lend money for risk-free return in the form of interest.

In distributing income among the factors, Islamic economic principles emphasize just and timely wages to the labour. Islamic equity financing principles like Mudarabah allow opportunity for labour to participate in the fruits of economic enterprise directly and proportionately. Returns to rentable factors of production are market based and productivity based. They facilitate asset ownership, but do not make it compulsory. In contrast, borrowing money on interest makes it compulsory to repay interest as well as principal without any reference and accounting of the productive outcome of the economic enterprise for which that loan was taken.

In interest based financial capitalism, need based and commercial loans are priced the same way on the premise of pre-supposed opportunity cost to serve the wishes of capitalists. Islamic principles encourage voluntary philanthropy or interest free loans to serve the needs of society. If a person wants to earn return on investment, it is made compulsory to invest in productive assets and then to sell or lease them to earn profit on trade or rent on lease. Else, the person shall provide investment as entrepreneurial capital, i.e. as equity stake in a productive business.

The noted author also talks about the distinction in the role of markets and consumer choice in the Islamic economic framework and capitalism. In capitalism, it is abhorred to anchor and regulate consumer sovereignty and market mechanism. Islamic economic framework provides the boundary conditions in terms of ethical principles which are binding on both consumers and producers. Within the boundary conditions of ethics, consumers and producers exercise choice. But, if distributive justice and social welfare demand, the government can intervene to anchor and regulate where necessary to avoid exploitation, wealth concentration, monopolization and injustice.

The author also emphasizes that Islamic economics framework does not suggest strict controls, central planning and loss of economic choice for the members of society. He writes: “Islam does not rely on the agency of the state alone to bring about distributive justice. It seeks to create among its followers a strong sense of social responsibility for the welfare of the poorer sections of society. If Islamic teachings are acted upon, distributive justice can be attained while individual liberties are preserved and regimentation is avoided”.

The author also explains the distinctions in the social security system in Islamic economics framework and capitalist framework. The latter is focused on insurance and social welfare. In social welfare, a lot of funds are used up in infrastructure than on eradicating poverty. Insurance funded by payroll taxes covers upper middle class more than the unemployed poor people. It is also dependent on economic growth and development. Countries which are less well developed, but which have high incidence of poverty are unable to design and apply social security systems. Rich are able to evade taxes, engage in capital flight and remain outside regulation with regards to their wealth.

Islamic economics framework emphasizes on rule of law for all and pursues eradication of poverty through a targeted and focused approach. Through Zakat and inheritance distribution,  it necessitates redistribution. Through prohibition of interest, it channels surplus wealth in productive enterprise. Finally, through encouraging voluntary charity, it urges pro-social behaviour.

The book is an excellent introduction to Islamic economics and its approach to tackle poverty and income inequalities. It was first published around 30 years back when Islamic Finance was only just starting in very few countries. The focus in the literature was more on achieving success in social goals like eradicating poverty, reducing income inequalities and ensuring inclusive, egalitarian and equitable financial and economic system.

The economics based explanation of Islamic institutions has not moved further in terms of analytical depth. The practice has been dominated by Islamic banking institutions which are facing competitive pressures and have to manage commercial displacement risk.

For different reasons in academia, the literature has also focused more on empirical analysis of these institutions. There is a need to reassess economic and social performance of the institutions that have been established and developed and remodel and reorient them if necessary. It is vital to ensure that the broader and visionary goals through which distinction was claimed for the Islamic economics framework are indeed achieved.