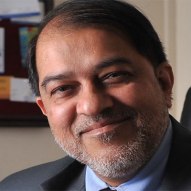 Dr. Muhammad Omar Farooq did his PhD from University of Tennessee and M.A. in Applied Economics from UCF College of Business. He had been associated with University of California as Post-Doctoral Fellow. He worked as Assistant Professor of Economics at Western Illinois University and later as Associate Professor of Economics and Finance at Iowa Wesleyan College. For a long time, he also worked as Associate Professor of Economics and Finance at Upper Iowa University. Currently, Dr. Farooq is an Associate Professor with the Department of Economics and Finance at University of Bahrain. He is an accomplished economist with special interest, background and expertise in economic development, financial markets and institutions, including from Islamic perspective. He was featured among the 500 most influential people who make the Islamic economy (190th rank in 2018). He has authored several publications in the form of research papers, book chapters and complete books. He is also author of the book ‘Toward Our Reformation: From Legalism to Value-oriented Islamic Law and Jurisprudence’. He is an accomplished educator, an active researcher, an engaging public speaker, an effective trainer, a prolific author on myriad of issues, and a contributor to critical/creative thinking and mind-building. His current interests and focus include Islamic law and jurisprudence and making Islamic economics and finance relevant to real world issues pertaining to poverty and development. We got an opportunity to get his insights on Islamic economics and finance and hope that these insights will introduce new ways of thinking for young economists and social scientists aspiring to contribute in this field.

Q.1: You were trained as a mainstream economist in top universities of USA, what inspired you to become researcher in Islamic economics?

Three things. First, as I advanced in my career as an academic economist and developed a better understanding of the field, I found it significantly delinked from the reality and particularly weak in terms of a theoretical edifice that is based on many unrealistic and untenable assumptions. This led me to take a more critical approach to economics in general, especially as conventional economics is oblivious to the transformative potential of human beings. Second, I came to the realization that there is too narrow a disciplinary approach to economics, while we could benefit more from an interdisciplinary approach, drawing on several related social sciences and even beyond. Third, as a Muslim I am convinced that there are some key Qur’anic guidance related to our life’s economic and financial dimensions and those are meant to be good not just for Muslims, but also for the humanity at large.

Q.2: In your writings, you had shown discomfort with mathematization of economics. At the same time, you had also urged economists working in Islamic economics to develop the field analytically. What makes you think that Islamic economics has merit to be a distinct and analytical field following the incomplete success of DSGE models to comprehend open and dynamic economy with heterogeneous agents making choices under uncertainty in imperfect markets?

I think the idea of mathematization of economics has to be properly understood. Mathematics is a vital tool of human knowledge and it can and should be applied as relevant and appropriate. The same is true about economics. However, consider the fact that the earlier generation of economists and even later on John Maynard Keynes’ contributions were more akin to “political economy”. Gradually, in pursuit of the precision of imaginary models, the reality of human behavior both at the individual and collective level was lost. That’s why much of the modern conventional economics is unable to predict, explain and solve the recurrent problems of the real world. Mathematics, where needed and useful to illuminate our understanding of the real economy, is desirable, while mathematization in pursuit of merely elegance, precision and internal consistency of various models is not. So, Islamic economics can become an analytical field by incorporating mathematics for clear articulation of complex interrelationships and pursuing empirical questions, but it shall avoid mathematization merely for the sake of elegance and conformity with current norm of articulation of thoughts in economics.

Q.3: As we deal with Post COVID-19 recovery, what effective role Islamic economics through its principles and institutions could play in your opinion?

I am afraid that despite its potential Islamic economics is not properly developed or positioned yet to have any systemic impact, especially in a crisis context. It is important to recognize that Islamic economics cannot be a discipline isolated from the economy in the context of the real world politics and governance. Also, Islamic economics cannot be merely a micro-enterprise. Islamic economics, without being anchored in a country or society’s robust, coherent and moral framework of national development, might not be quite capable of delivering what is often expected of it. To appreciate the challenge, one needs to identify what Islamic economics has done before the Covid-19 in a normal environment to be able to determine what it might be able to offer in a pandemic-induced crisis, unless Islamic economics is reduced primarily to zakat, sadaqa and other charitable instruments. I invite the readers to peruse a relevant paper of mine: “The Challenge of Poverty and the Poverty of Islamic Economics.”

That’s true, but partially. One needs to recognize that the emergence and introduction of microfinance came about primarily due to the public sector failure of many emerging, less developed countries to effectively address their fundamental economic problems. That reality still remains. Microfinance is no more than resources that are for targeted intervention in a supervised framework. There is a lot to learn from the contributions of institutions like Grameen Bank and anti-poverty initiatives. Unfortunately, the effectiveness of such initiatives cannot be measured merely in terms of Shari’ah compliance of the relevant contracts. Contracts themselves do not have any magic, the real outcome is more dependent on the design and delivery of the services in a well-planned, well-supervised framework to serve targeted groups. In this regard, Islamic microfinance should not be merely taking the conventional microfinance and fit it into Shari’ah compliant contracts. While learning from both the positive and negative experience of conventional microfinance, Islamic microfinance needs to be more innovative and more humanly-sensitive to the problems that microfinance generally tries to address.

Q.5: How do you see Islamic finance and Islamic capital markets in 2021 as most economies are expected to post positive growth rate and vaccination at mass scale may keep spread under control?

I am quite positive about it. More growth and expansion are likely after a turbulent year following the outbreak of COVID-19.

Unfortunately, there is no simple answer to this question. In my humble view, in developing Islamic finance in the way it has happened, without it being anchored in an economy based on Islamic values, norms and parameters, current Islamic finance is like putting the cart before the horse. I have articulated my thoughts in this regard in a paper “Islamic Finance Eclipsing Islamic Economics: Causes and Consequences”. Also in my view, our effort should not be concentrated too much on the theoretical edifice in abstract; rather, we should identify what our fundamental economic problems and challenges are and how our theoretical and empirical works can help us effectively address those problems and challenges. Our current literature on Islamic economics seems to fall short on that practical side.

Q.7: What is your advice to aspiring researchers in the field of Islamic economics and finance?

It is still a rather new field that we must continue to nurture. During the twentieth century, the revivalist efforts aspired to bring back Islam in our life comprehensively, including in the economic dimension of our life. However, for various reasons, Islamic finance became dominant pushing Islamic economics in the background. To be able to deliver what is expected of it, Islamic finance needs to be anchored in an Islamic economic framework. Our pursuit of an Islamic economy, in my view, should be practical and problem-solving oriented. I hope that aspiring researchers in the field would not feel constrained by the developments in this field to date and approach the field afresh if needed. We can benefit from the current shelf of knowledge and experience, but must not feel constrained by it.