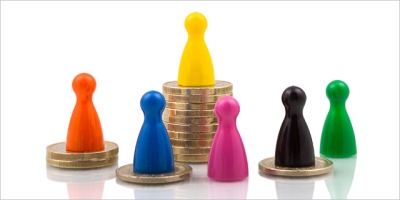 It is a fact that income inequality even in developed countries is high and has been increasing despite sustainable growth experienced in growing East Asian countries and also in Europe and North America in general.

One of the explanations often given for the presence of income inequality is that people have different skills and their productivity levels are different. Some people are ambitious and using their innate abilities and opportunistic circumstances, they tend to acquire highly employable skills and are therefore worthy of relatively above average compensation. While, on the other hand, some people who do not have the above mentioned characteristics or circumstances, they may get relatively lesser compensation.

The promise of equal wage and standard of living in communism is very attractive at its face value and especially to the masses that generally do not have highly employable and demanded skills, access to quality education and opportunistic circumstances. The argument that each person as a human being shall have equal rights and equal standard of living seems convincing.

However, it is a fact that people have different tolerance for risk, different innate abilities, different attitude towards progression in life and career, different levels of ambitions and as a result, they exert different levels of effort in acquiring education, skills set and as a result, their productivity levels are different. The difference in characteristics highlighted above may not necessarily be a result of discrimination. Most of these could be controlled and shaped by individuals and their intertemporal choices. Equalizing everyone’s compensation despite these differences would be unjustified.

Nevertheless, Islam addresses the problem of inequality of income and discriminatory access to resources in a different and direct way. We have seen that inequality of income can result into biased access to education, health and welfare services. It is possible that people with low income are unable to have access to quality education, quality health facilities, unable to invest in skill enhancement and human capital development and due to that, they may remain in a poverty trap and unable to get out of it in a free market economy.

With regards to discrimination, as per Islam, there shall be no discrimination based on gender, religion, region and ethnicity. But, if people have different levels of productivity, then their wages can be different and determined in the labor market through demand and supply.

With regards to the inequality of income, we know that income inequality can result from wealth inequality when there is fixed return on loanable wealth in the form of interest. Interest based financial intermediation brings concentration of wealth eventually in every society by granting private right of fiat money creation to central bank and allowing fractional reserve system which gives right to private banks to create credit money. This money capital can be loaned out and fixed interest can be earned on it. Hence, financial capitalists will be immune to losses to a large extent. But, the other factors of production cannot have that luxury as their compensation from the productive activity is either linked with provision of services (in the case of labor) or provision of assets (land or physical capital) that have intrinsic value, but they are scarce and  they also lose ‘use value’ with the passage of time unlike the money capital.

Islam disallows interest based earnings and closes the door for systematic increase in inequality of income resulting from wealth inequality. People in an Islamic welfare state will benefit from the institution of Zakat and Waqf. Furthermore, ‘Infaaq’ (charitable giving) and disallowing interest based earnings and financing will also free up resources and generate circulation of wealth in the production process.

Hence, in a nutshell, Islam allows wage differentials based on productivity differences, but does not allow discrimination. Furthermore, if wage differentials are because of characteristics that require equitable distribution and access to resources, then, Islam has unique mechanisms that ensure equitable distribution of resources and opportunities.